The food scene in Hyderabad is changing - for the good. A city which I always associated with biryani joints, kebabs and paan is now opening its doors to international food. It still has a long way to go before its food scene is equal to that of Mumbai, Bangalore or Delhi but atleast we are moving towards it. 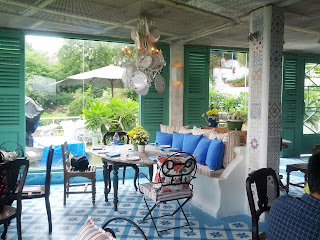 Olive Bistro is one such scene changer. It has beautiful Mediterranean décor with a view of the Durgam Cheruvu Lake and some charming vintage furniture. I loved the mismatched chairs at every table and the  cutlery chandelier. A part of the Olive Bar and Kitchen located in Bangalore, Mumbai and Delhi, Olive Bistro has its presence in Pune as well. Let's taste. 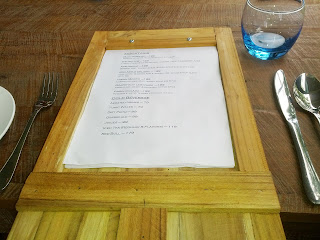 The test menu comes in a rustic wooden pad with printed papers. One of the better test menus I have seen, though the top most mentioned dishes were covered where the paper was attached but no biggie. 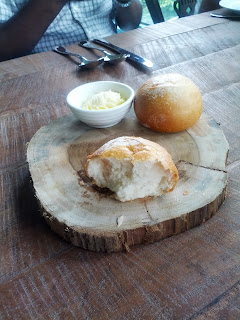 We were served fresh, warm bread while we ordered. Two bread rolls and a piece of focaccia bread. I love fresh, crusty bread with soft insides. So +1 for the fact that they have their own bakery where they bake these treats! Always better than sourcing bread from outside. 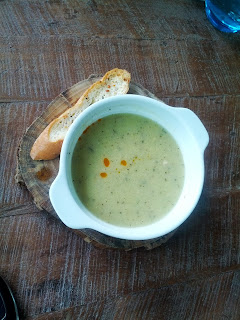 For starters, we tried their French chowder with smoked chicken. It was served with garlic butter toast. The soup was creamy with bits of chicken and potatoes. It reminded me more of a cream of mushroom soup with potatoes. And it was also on the sweeter side. I enjoyed it the most when I dipped the toast into the soup; the sweetness of the soup didn't go down well with me. 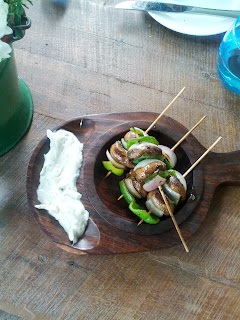 Cremini mushrooms skewers with herbed mayo sauce,is what we were served instead of the crumb fried mushrooms we had ordered -- slight mix up by the staff. Before we realized this, we had eaten two of the skewers . The mushrooms, bell peppers and onions were fresh and sweet. The mayo sauce was spruced up with some thyme which went well with the mushrooms. But the dish was again on the sweet side. I personally didn't like it but it got a thumbs up from my friends. 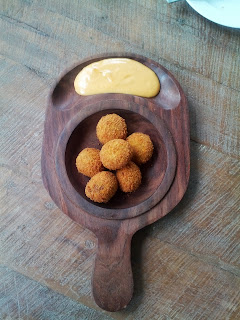 When we told the staff about the wrong order, they graciously insisted on bringing us the correct dish: crumb fried cremini mushrooms stuffed with ricotta cheese and thyme. We loved it! Mushrooms beautifully covered with a thin layer of crumbs batter (unlike the thick, under cooked layer that most crumb fried items are covered in) and stuffed with gooey ricotta cheese with thyme and fresh pepper which gave a nice punch to the otherwise neutral cheese. They were served with a side of spicy mayo sauce. The dish was not oily at all. We almost ordered a second potion. If you like mushrooms, this dish is a must try. 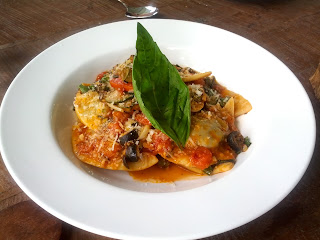 For our main course, we ordered their ravioli. I love ravioli - thin pasta stuffed with cheese and spinach or pumpkin (traditionally). Olive Bistro's ravioli comes stuffed with spinach and walnut in a sauce of tomatoes, cold pressed olive oil, capers, black olives and fresh basil. The combination is a party in the mouth. The sauce was the star of the dish. Fresh ingredients especially the fresh basil which just elevated the taste. The capers and the olives added a nice zing to the sauce. As for the ravioli, the pasta could have been less dense, but the spinach-walnut stuffing went well; the walnuts giving it a nice crunchy texture. I wish they had added a bit of cheese to make it less dry. Have it for the sauce! 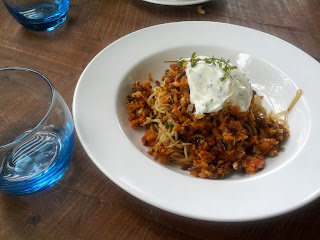 Whole wheat pasta with a three mushroom mixture and sour cream - another win for Olive Bistro. This would be my comfort food. The pasta was perfectly cooked - al dente and not mushy. The three mushrooms - I could recognize only cremini and shitake - mixture was delicious. The sour cream ensured the dish wasn't too dry. Eat all together or separately, you will enjoy this dish if you like pasta, mushrooms and sour cream. 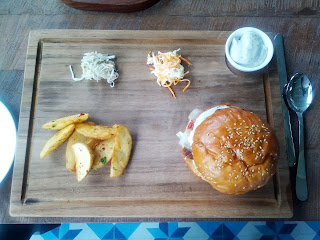 Lovely presentation, eh? This is a similar presentation of burgers like I'd had in Chicago in The Butcher and the Burger where I've had the best burger by far. Though Olive Bistro's chicken burger was a let down. The bun smelled funny which ruined the taste of the chicken patty as well. Even having just the patty, didn't help me like the dish. The accompaniments were standard burger accompaniments. The mustard was made in-house. They had the traditional coleslaw and another mixed with the mustard - both tasted fresh. The potato wedges didn't disappoint - crisp and well seasoned. 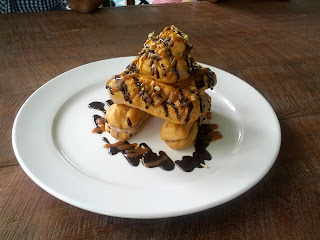 Dessert! We had to try them - the menu looked tempting and I was with people who love trying dessert! We ordered these profiteroles filled with milk chocolate ice cream and drizzled with chocolate and caramel sauce and nuts. Since you have to freeze ice cream, the profiteroles were hard but the taste was still good. The milk chocolate ice cream was subtle and delicious. I had two of these! The sauces added to the deliciousness. 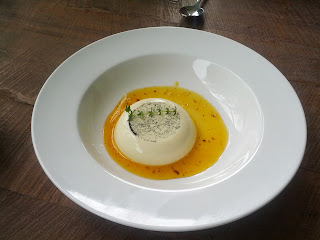 Their signature dessert, vanilla bean panna cotta with orange and pink peppercorn syrup was as good as they come. If you love orange, this is the dessert for you. The syrup is thick and delicious with hints of peppercorn which complements the orange well. The vanilla bean panna cotta is smooth and creamy and acts as a great base for the syrup. Their other signature dessert is the 7-flavour mega cake. I plan to try it the next time.

Although there were some hiccups, the food was good and the location plays a great part in ensuring you have a pleasant time. I would go back for some comfort pasta, fresh bread and the décor. 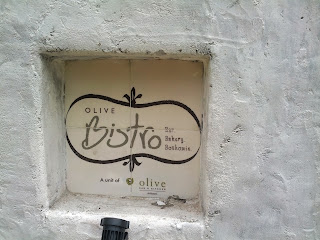